Over a decade ago RSS (RDF Site Summary or Really Simple Syndication) was attracting a lot of interest as a way to integrate data across various websites. Many science publishers would provide a list of their latest articles in XML in one of three flavours of RSS (RDF, RSS, Atom). This led to tools such as uBioRSS [1] and my own e-Biosphere Challenge: visualising biodiversity digitisation in real time. It was a time of enthusiasm for aggregating lots of data, such as the ill-fated PLoS Biodiversity Hub [2].

Since I seem to be condemned to revisit old ideas rather than come up with anything new, I've been looking at providing a tool like the now defunct uBioRSS. The idea is to harvest RSS feeds from journals (with an emphasis on taxonomic and systematic journals), aggregate the results, and make them browsable by taxon and geography. Here's a sneak peak: 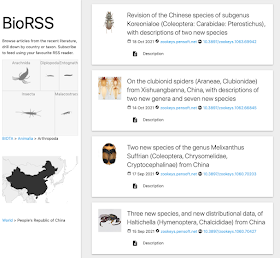 What seems like a straightforward task quickly became a bit of a challenge. Not all journals have RSS feeds (they seem to have become less widely supported over time) so I need to think of alternative ways to get lists of recent articles. These lists also need to be processed in various ways. There are three versions of RSS, each with their own idiosyncracies, so I need to standardise things like dates. I also want to augment them with things like DOIs (often missing from RSS feeds) and thumbnails for the articles (often available on publisher websites but not the feeds). Then I need to index the content by taxon and geography. For taxa I use a version of Patrick Leary's "taxonfinder" (see https://right-frill.glitch.me) to find names, then the Global Names Index to assign names found to the GBIF taxonomic hierarchy.

An example of such a parser is the Edinburgh Geoparser. Typically geoparsing software can be large and tricky to install, especially if you are looking to make your installation publicly accessible. Geoparsing services seem to have a short half-life (e.g., Geoparser.io), perhaps because they are so useful they quickly get swamped by users.

Bearing this in mind, the approach I’ve taken here is to create a very simple geoparser that is focussed on fairly large areas, especially those relevant to biodiversity, and is aimed at geoparsing text such as abstracts of scientific papers. I've created a small database of places by harvesting data from Wikidata, then I use the "flash text" algorithm [3] to find geographic places. This approach uses a trie to store the place names. All I do is walk through the text seeing whether the current word matches a place name (or the start of one) in the trie, then moving on. This is very quick and seems to work quite well.

Given that I need to aggregate data from a lot of sources, apply various transformations to that data, then merge it, there are a lot of moving parts. I started playing with a "NoCode" platform for creating workflows, in this case n8n (in many ways reminiscent of the now defunct Yahoo Pipes). This was quite fun for a while, but after lots of experimentation I moved back to writing code to aggregate the data into a CouchDB database. CouchDB is one of the NoSQL databases that I really like as it has a great interface, and makes queries very easy to do once you get your head around how it works.

So the end result of this is "BioRSS" https://biorss.herokuapp.com. The interface comprises a stream of articles listed from newest to oldest, with a treemap and a geographic map on the left. You can use these to filter the articles by taxonomic group and/or country. For example the screen shot is showing arthropods from China (in this case from a month or two ago in the journal ZooKeys). As much fun as the interface has been to construct, in many ways I don't really want to spend time making an interface. For each combination of taxon and country I provide a RSS feed so if you have a favour feed reader you can grab the feed and view it there. As BioRSS updates the data your feed reader should automatically update the feed. This means that you can have a feed that monitors, say, new papers on spiders in China.

In the spirit of "release early and release often" this is an early version of this app. I need to add a lot more feeds, back date them to bring in older content, and I also want to make use of aggregators such as PubMed, CrossRef, and Google Scholar. The existence of these tools is, I suspect, one reason why RSS feeds are less common than they used to be.

So, if this sounds useful please take it for a spin at https://biorss.herokuapp.com. Feedback is welcome, especially suggestions for journals to harvest and add to the news feed. Ultimately I'd like to have sufficient coverage of the taxonomic literature so that BioRSS becomes a place where we can go to find the latest papers on any taxon of interest.